Pulling lists of data from Firebase is helpful. You can retrieve your stored data whenever you want, but what if you don’t want all of it?

What happens when you want to just get some records, like only the people over 40 because you’re giving a talk in possible schools for their children?

For that you have to learn about how to query data in Firebase, don’t worry, it might sound intimidating, but it’s pretty easy since Firebase already created the querying functions for us, we just need to use them :-)

Do you know how to create and configure a new Ionic + Firebase app? If you don’t, check out this post before, if you do, join me while we go through sorting data with AngularFire

The first thing we’ll need is a bit of introduction to what kind of data we’re going to sort.

I created a dummy data node on my Firebase app that’s a list of people with random attributes.

Today we’ll do 2 different queries, we’re gonna query people with a certain eye color, to test the equality query and we’re going to pull people over a certain age, to make sure we understand how to query greater than values.

The first thing we’ll do is to pull the entire list of people from Firebase so that we can query against that list.

We’re also importing AngularFireList since we’re going to be working with a list of data and AF2 handles that as an observable.

Now we’ll add the people variable so we can reference it in our HTML and inject AF2 in the class constructor:

That is creating a database reference in a node called random (I know, bad name for a node) that has our list of people, and then it assigns it to people.

Now we’re going to display that data in the home.html file, so we can see that there are already some data there to play with: 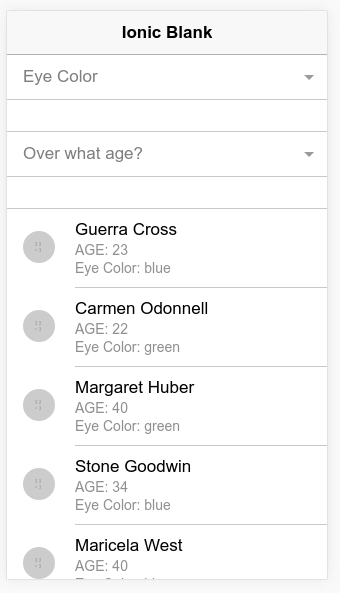 We’re creating a list that’s going to loop through the people list and show us a picture, their names, age, and eye color.

Querying against a specific value

The first query we’ll do is an equality one. We’re going to tell AngularFire2 to bring only the people who match the selected eye color (blue or green).

For this, we’ll first build a little select function inside our <ion-content> and tell it to call a pickEyeColor() function on value change: 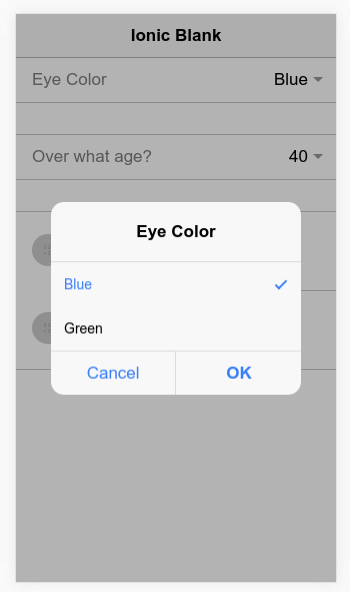 That’s just your regular Ionic 2 select component, we’re giving it to options blue or green and we’re adding an (ionChange) function that calls pickEyeColor functions and pass it the color every time that value changes.

Now, we’ll create that function on our home.ts file: 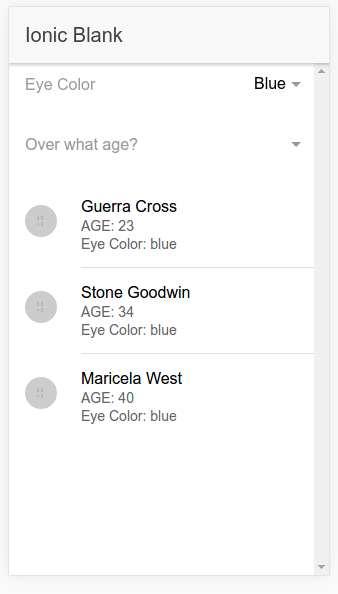 query, how it works is that it tells AF2 that you’d like to run a query against that node, and AF2 translates that into something the SDK can understand.

In this case, we’re telling it we want to orderByChild and we’re giving it the value of eyeColor, what this does is that it’s going to look in our list for a property calledeyeColorin every child node inside/random

Then we’re telling it that the property eyeColor needs to be equal to whatever it is we’re passing as the eyeColor parameter (yeah, I’m not the best at naming things)

We need to create a new select on the home.html file, just like the one before:

This time we’re calling the pickOlderPeople() function and we’re passing them age, 30 or 40 years old.

We’re doing it like this, but you can create a regular input field and type in the age that you want to query against.

Now, we need to create the pickOlderPeople() function in out home.ts file:

It’s almost the same as the one before, just two things change:

This is because no matter what I was doing the function was taking the age as a number but passing it to the startAt as a String, so if you figure this one out let me know. 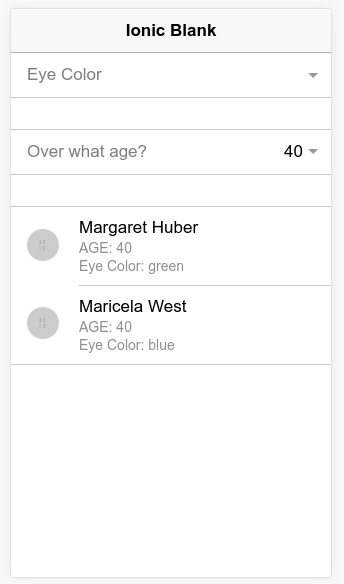 And there you have it. You can get everyone who is above a certain age.